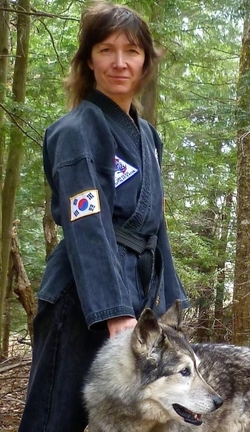 Andrea Malik studied Qigong for 15 years under Kenneth S. Cohen and is a graduate of his Teacher Certification program. She also took Dr. Yang Yang's "Evidence Based" Qigong Teacher Certification Program. She has been practicing martial arts since 1980 and has achieved a 6th Degree Master Rank Black Belt. Since the 1990s she has taught martial arts and other fitness classes such as TABATA for the SUNY Potsdam non-credit department, and has taught Qigong workshops at St Lawrence University, SUNY Canton, and Clarkson University. She has also taught martial arts at a large martial arts camp and assisted Kenneth Cohen's Qugong workshops at Kripalu Center forYoga and Health in Massachussetts. Andrea is founder of Spirit Forest Martial Arts and Qigong School in Colton NY.

Andrea has a degree in biology & geology from SUNY Potsdam and was a student of Tom Brown Jr. at his Tracking, Nature, Wilderness Survival school and has taken tracking workshops with Del Hall and Paul Rezendes among others. She has taught numerous tracking workshops throughout the North Country.

Andrea has also been the Director of the Town of Colton's BTI (bacillus thuringiensis israelensis) Black Fly Control program for nearly 30 years, and sees great opportunities in tracking and wildlife encounters while bushwacking along the streams in Colton.